3 Reasons Someone Will Watch Your Video

Last month, we released “History in the Making,” a new live-action video created to celebrate the partnership between Nokia Devices & Services and Microsoft. There are many ways to announce a company partnership, but we chose the only sensible one: using a Rube Goldberg machine.

When Nokia first approached us to create the announcement video, we were energized by their enthusiasm. Here was an iconic brand joining another mega-brand, both with a rich history. Our task was to showcase this history and new partnership, and to do so in a way that would excite our audience. We knew that we would need to entice viewers and captivate their interest, but a traditional announcement would likely fall flat.

As we began to brainstorm, we kept thinking about Nokia’s iconic product: the cell phone. We reminisced about all those classic models from the ’90s and early 2000s, playing Snake, adding colorful face plates and composing badass custom ringtones to send to our friends. This nostalgia was powerful, and coming off the success of the viral “Child of the ’90s” spot we created with Internet Explorer, we thought this might be another opportunity to nurture that sentiment, while creating something for Nokia that was all their own.

The challenge, still, was to pay homage to these brands and give a glimpse at their promising future. The more we thought about the Nokia phone, the more we were struck, beyond our fond memories, by how simple and rudimentary the technology was by today’s standards. And yet, at the time, we were mesmerized. That’s when it clicked. What other simple, rudimentary technology delivers that same feeling? The same novel, fun and entertaining experience? A Rube Goldberg machine. 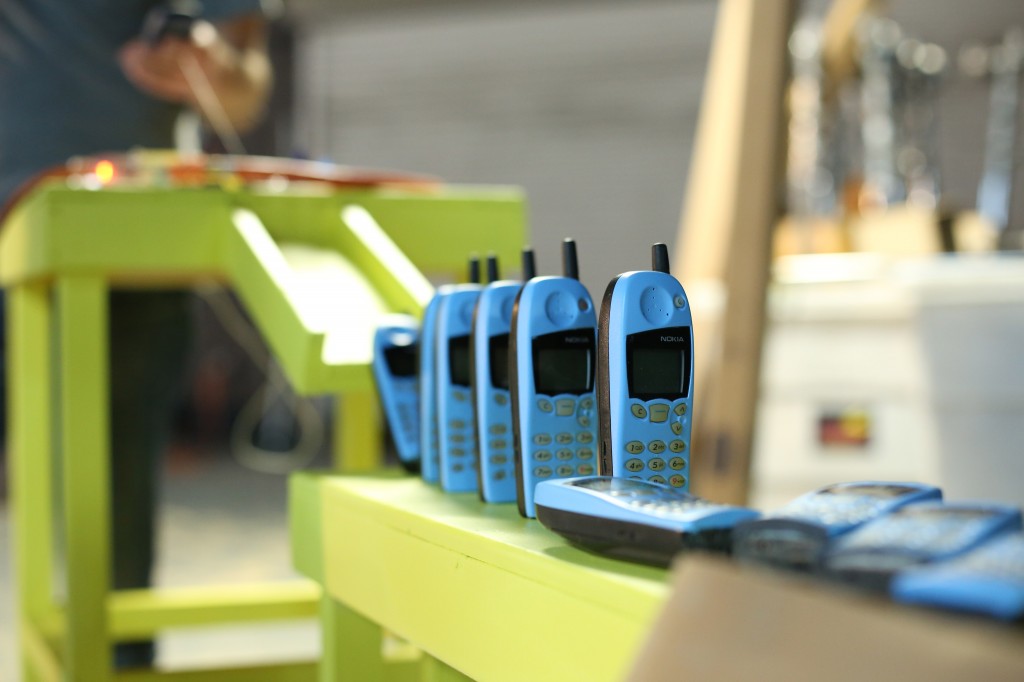 We decided to create our own machine, incorporating classic technology from Nokia and Microsoft. This machine would visually tell the story in an intriguing way: the evolution of two brands, making something new together. It would also nicely bookend the “Child of the ’90s” video, borrowing certain elements, such as the overall art direction and inclusion of classic Microsoft and Nokia products. And, best of all, it would entice viewers to engage with the video (i.e., watch all the way through) to find out what happens.

So, that’s how we found ourselves with an office full of classic Nokia phones (800 in total), in search of a killer Rube Goldberg engineer. We teamed up with Brett Doar (creator of the machine featured in OK Go’s iconic “This Too Shall Pass” video) to make it all happen. 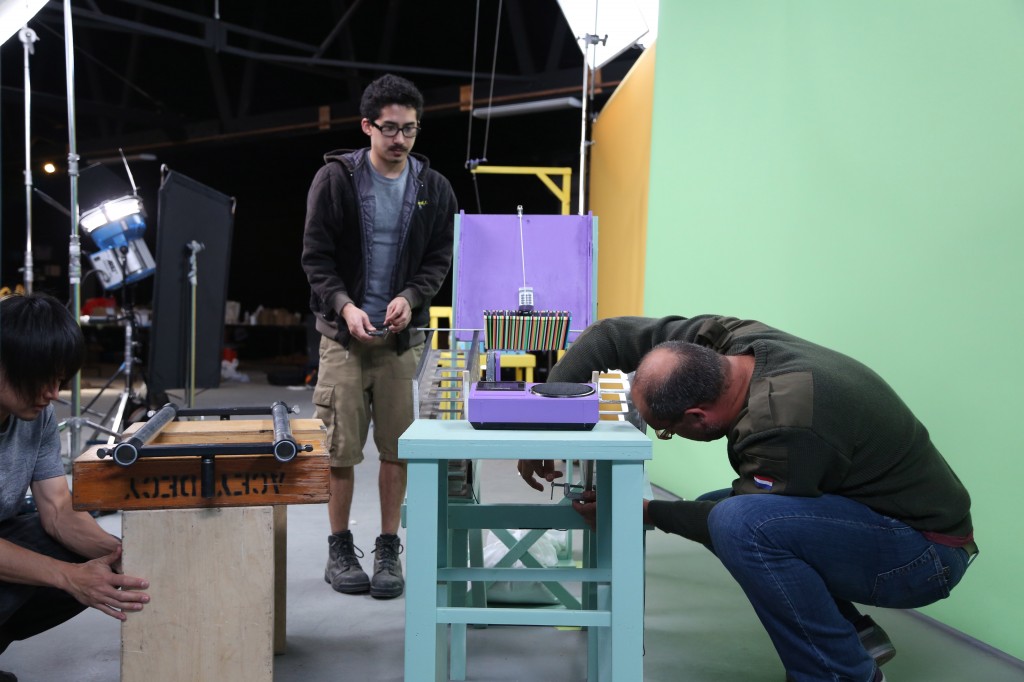 Brett Doar (far right) and his team adjust one of the video’s opening scenes.

The machine allows us to journey through Nokia’s and Microsoft’s past, as 24 Nokia phone models from 1992–2014 drive the timeline forward. Other products included a Dot Matrix printer, colorful floppy disks, an original Xbox system, a pixelated mouse cursor, a giant Bliss home screen background and a literal set of windows with curtains resembling the Microsoft logo—all of which tell the story of the partnership. 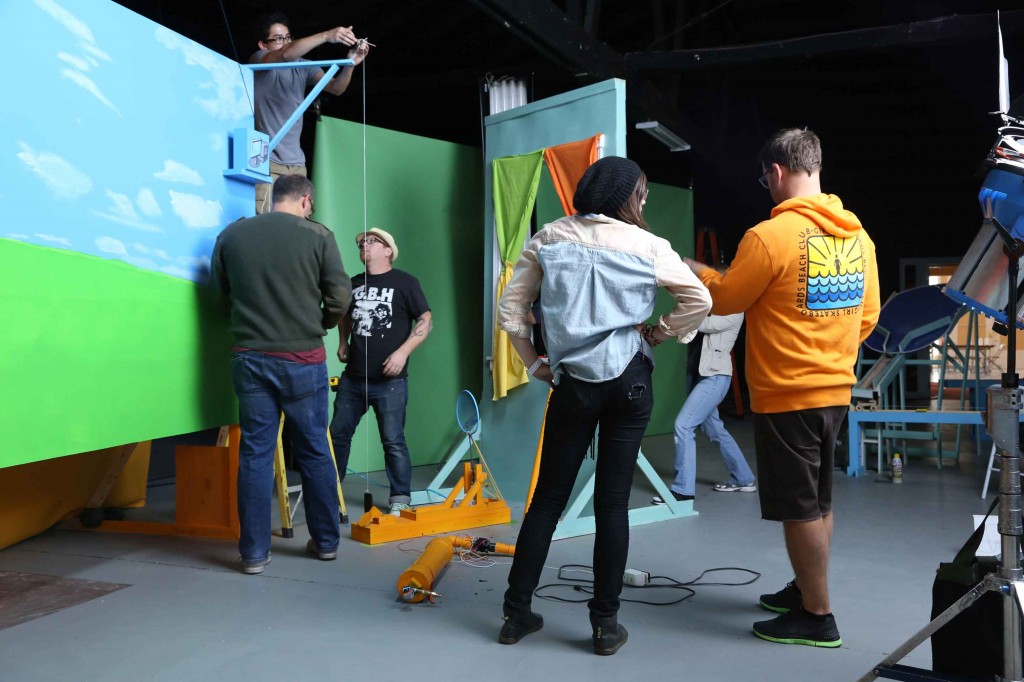 The production team prepares to launch a Nokia phone through a physical window, dressed similarly to the Microsoft Windows logo.

3 Reasons Why the Video Worked

Along with the story told, three other elements contributed to the video’s success.

1) An Unusual Presentation: We could have made a more traditional video, but delivering the message in an unusual way is more appealing. The entire presentation, from color schemes and music to the contraption and a few visual Easter eggs, offers viewers something new and exciting.

2) Product Nostalgia: A successful spot connects with audiences emotionally. For this video, the nostalgia was in the beloved Nokia phones and their memorable features, as well as other non-Nokia relics of the era like cassette tape players, floppy disks and the original XBOX.

3) A Big Payoff: The Rube Goldberg machine encourages people to watch the video in its entirety. It immediately piques curiosity, as every part of the machine builds to something bigger. People want to see what happens, and the spot delivers. By nature, the machine is complicated and detailed, which means people can watch the video several times and continuously see things they may have missed when they first watched it.

This video is exactly why we love the work we do. Getting to partner with these great brands and try something new inspires us, and we’re happy when it all goes well. (Even if you need a few takes to make sure.)

Want more content marketing tips?
Of course, if you need a little help with your content, we’d love to chat.
Comments
How to Apply Good Design at Every Level of Your Organization
Free E-Book: How to Build a Long-Term Content Strategy in a Real-Time World
Introducing Column Five's First Video Game: Groove Glider
How a Divisible Content Strategy Gives You More Content With Less Work
We use cookies to ensure that we give you the best experience on our website. If you continue to use this site we will assume that you are happy with it.OkCookies policy