Ask An Editor: How Do You Create Amazing Content?

It’s often said that to achieve success in content marketing, brands should “act like a publisher.” But how do publishers act? What should brands specifically be emulating? With our new “Ask an Editor” series, we’ll reveal key takeaways from journalists on how to create amazing content.

My first interview is with Derek Thompson, Senior Editor at The Atlantic. Thompson writes about economics, labor markets, and the entertainment business, and is well known for his original, colorful, and often humorous way of explaining complicated issues. His articles are frequently the highest performing on TheAtlantic.com and drive an impressive number of social shares. He also served as an adjunct professor at the Columbia University Graduate School of Journalism, where he taught a class on writing for the Internet.

A really important aspect of content, particularly on the Web, is the quality of insight. And insight doesn’t need to be surprising. It can be insight about things that are very familiar, and that give us a frame for things that are already top of mind. Or, in the case of a lot of advertising, something that makes us feel good about ourselves. Good content should produce some new line of thought.

How do you choose what to write about?

I read Twitter until I find something that raises a question. I wait until I become curious about something. That’s a luxury I have, though. I think that sometimes people are more distrustful of brands than they are of journalists, because brands come with an explicit message — “buy my thing” — and journalists don’t. I think it’s a little weird when a brand tries to harp too much on what people are talking about. What does a soda company have to say about Ferguson? That seems cheap.

What should brands write about?

When corporations try to act like publishers in ways that are inauthentic, it smells inauthentic. A good example of a corporation acting like a publisher that doesn’t feel inauthentic is Red Bull and [Felix Baumgartner] jumping from the stratosphere to the earth. That was amazing! But I didn’t feel like that was Red Bull’s take on the news. This is an incredibly newsworthy story that Red Bull owns. So creating things that you can own is important. But weighing in on a topic that everyone else is talking about – I would say, instead: Be creative.

Also, there are Wikipedia-ish questions that brands could be really good at answering. Like Lockheed Martin explaining “What is rocket science?” Can they teach me an easy rocket science lesson in five minutes? That’s cool.

What are some things brands should keep in mind when creating content?

What is important to consider about your audience when writing?

Brands overthink it sometimes. [For example], what I want from J.Crew is to look better. If I were hired at J.Crew, I would first look at how people are using their brand already. When people visit JCrew.com, what are they doing? Figure out how people are already engaging with you and your brand, and then preempt their engagement.

Is there a balance you try to strike with real-time content vs. evergreen?

The Atlantic isn’t somewhere people go to find out about the news, but instead to learn more about what the news means. [For evergreen content], we looked at our analytics to see what was working. We learned that people loved reading certain writers on certain topics. So when we needed traffic, we would just do that. We would go to the well, and it would just be this massive hit on Facebook. 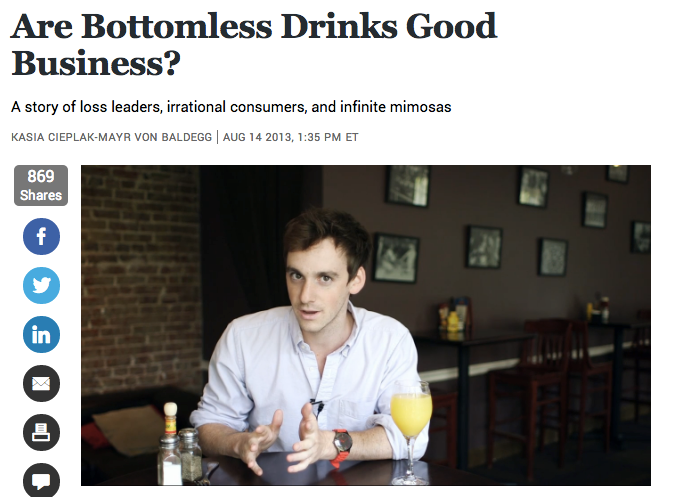 Derek Thompson in his video series, ‘Economics in Plain English.’

What metrics do you look for?

The metric I consider the most important is unique visitors. I’ll follow how I’m doing on a monthly basis. I’ll pull up the most popular pieces I’ve written in the last six months and find trends.

What trends did you find?

One clear trend was that pieces where readers can cast themselves inside the story tend to do the best. People really love reading about diet, health, exercise, being a Millennial, tech that they own — stories that are about their lives. Most of The Atlantic’s hits both in print and online have had this key element of relatability where readers could see themselves as a character in the story.

Do you have any advice for writing headlines?

Emotion is a really important part of successful digital pieces. People are hunting for positive or negative emotions they can share with other people. Since emotion is really important in articles but absent in economics, I often have to inject emotion into the headline like, “17 Astonishing Facts about U.S. Inequality.” Statistics about youth unemployment aren’t inherently emotional. You have to give the reader a bit of a preview and say, “Here’s the emotion you’re going to feel when you read these statistics.” 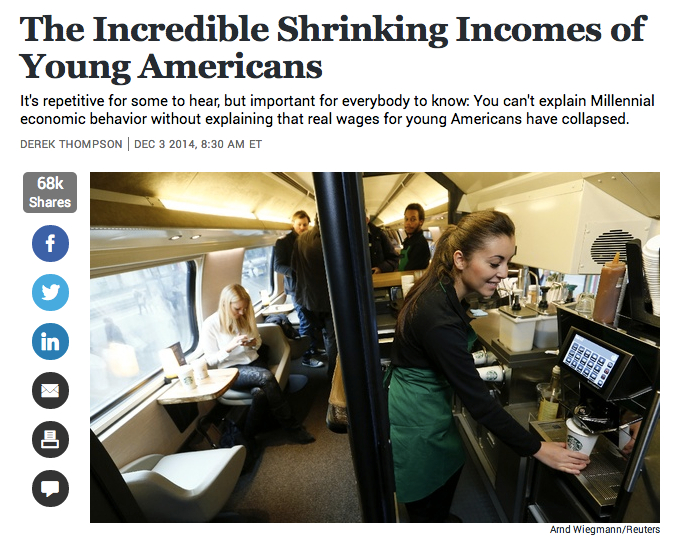 Is there a balance or sensitivity to not going too “Upworthy-ish”?

People like to bash Upworthy, but one thing it’s clearly good at is mastering the curiosity gap, even in an over-obvious way. The curiosity gap is: Here’s 2/3 of the story, the next 1/3 of the story is going to make you cry out of your nose, but we’re not going to tell you what it is. Give them a little bit of the story, but don’t tell them the answer. It’s a successful and totally reasonable way of selling stories.

Once you’ve written your piece, what is your best practice for sharing it?

It’s important to build multiple broadcast channels. The more broadcast channels, the better. You can’t just rely on random people to find [your content] and share it. [At The Atlantic], we’ll post the article on Facebook with one headline and Twitter with a different headline and measure the difference to see which one performs best.

What advice would you give for creating compelling content?

Writing with a conversational voice is really important. In digital we expect the voice to be more relaxed. We believe the Internet is more of a peer-to-peer publishing platform, and we want to hear people talk how we’re used to people talking.

What was the worst advice you ever received?

I was told in college not to blog. That was obviously not useful at all. They thought it was a fad.